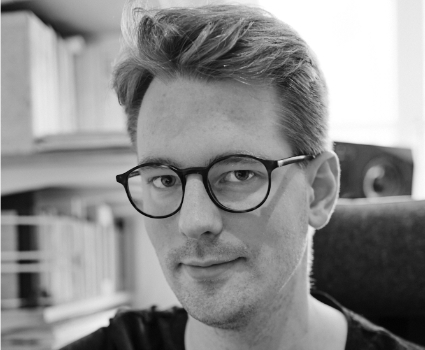 Fabian Zeidler is a German composer, orchestrator, music engraver and percussionist, working in the fields of instrumental acoustic music, film music and electroacoustic music. In his current concert pieces he tries to create an ambivalent music sphere by implicating jazz- harmonic, -rhythm and -melody into his own musical language.

He studied composition and percussion at the University of Arts Berlin as well as at the Jāzeps Vītols Latvian Academy of Music in Riga. His music was played by a variety of artists, ensembles and orchestras such as the WDR Symphony Orchestra, Latvian National Symphony Orchestra, Ensemble JungeMusik, Landesjugendensemble Neue Musik Berlin, SonarQuartett and Ensemble Kuraia in Europe, USA and Japan. His work as an orchestrator includes films such as Jim Knopf und die Wilde 13, Die Wolf-Gäng, Deutschstunde or School of Magical Animals.

Since 2019 he is studying part-time music for film at the Filmuniversity Babelsberg Konrad Wolf. Within the project he is composing music for an interactive dream sequence within the VR experience.